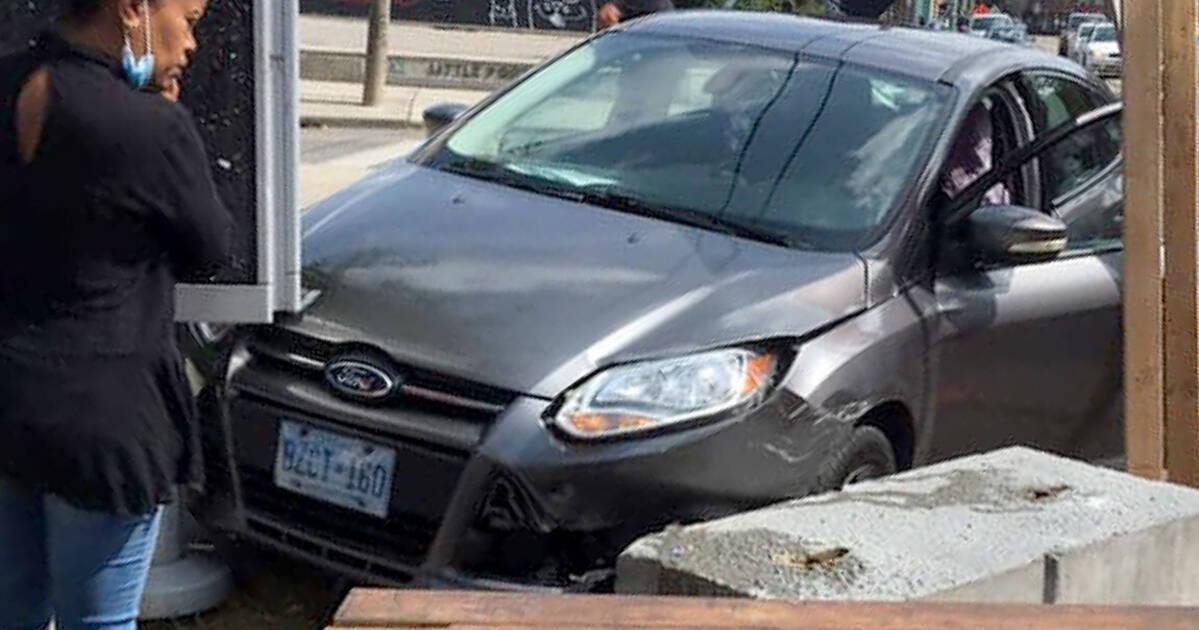 Toronto’s CafeTO program has allowed restaurants all over the city to open curb lane patios as a way for patrons to dine safely amid the pandemic, but it seems the initiative has helped to curb one safety risk while presenting another: cars.

The severity of that risk became clear earlier this month when someone drove straight through the patios set up in front of two popular Parkdale restaurants in the middle of the night, and this week there was yet another close call involving a curb lane patio and a vehicle collision.

According to a Facebook post from resident Leea Puntanen published in the Ossington Community Association group, a two-vehicle collision at Dundas West and Lake View resulted in a car nearly ramming into the curb lane patio outside Churchill Bar.

Churchill Bar has not responded to blogTO’s request for comment, but fortunately, the bar was closed at the time of the accident — which was around 12:30 p.m. on Sunday — so no one was injured.

A concrete block in place to protect the patio also helped save the day, preventing the car from plowing straight into the picnic tables set up in the curb lane.

“The driver was coming south on lake view and another driver was turning north at the intersection from Dundas,” wrote Puntanen in the comments section of the Facebook post.

“The choices ( neither good) hit the north bound car or drive into cafeTO patio.”

And while the fact that the bar was closed as well as the placement of the concrete block did help prevent the accident from causing injuries or property damage, the incident is a stark reminder of the dangers that exist when people dine so close to moving traffic.

“CaféTO locations were designed with both safety and accessibility in mind and each curb lane location requires a detailed traffic management plan, including compliance with the Ontario Traffic Manual Book 7,” reads a statement from the city provided to blogTO following the previous curb lane patio collision.

“This includes advanced signage notifying oncoming motorists that the curb lane ahead is closed, large detour signage to notify motorists to change lanes, large safety barrels or concrete barriers in advance to indicate the lane closure and, in some cases, speed limits have been reduced to support safety.”

But with the news that Toronto is attempting to extend patio season for as long as possible by allowing restaurants to install outdoor heaters, here’s hoping these measures are enough to prevent yet another incident like this from happening with even more dire consequences.

Toronto’s neighbourhood of the future is getting raincoats for buildings