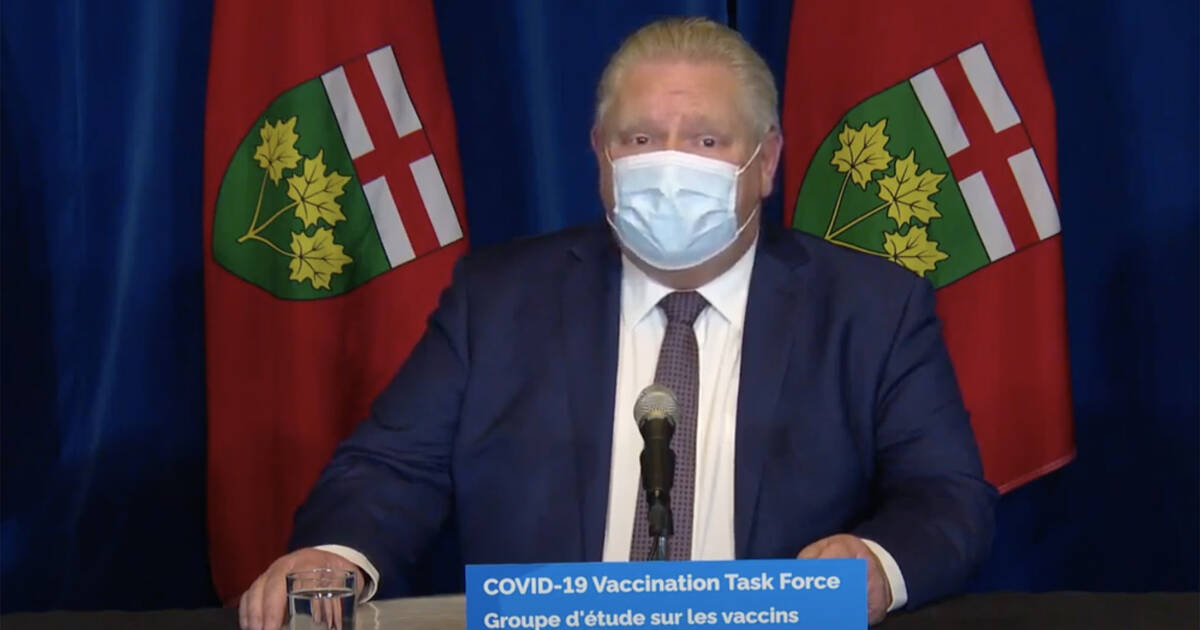 Ontario Premier Doug Ford is known for many things, but lately, it’s been the hilarious one-liners he delivers without even realizing it during his regular pandemic briefings.

Tuesday was no different as Ford shocked viewers with a particularly memorable quote while addressing reporters and the public on the topic of the province’s COVID-19 vaccines — or rather, lack thereof.

When asked about the new revelation that Canada will not be receiving any shipments of Pfizer innoculations at all next week, the premier said that he was “very, very angry” about the delay before detailing how he would handle the head of the pharmaceutical giant if he was controlling the nation’s vaccination plan.

“If I was in [Prime Minister Trudeau]’s shoes — I’m sure he is doing it, but — I’d be on that phone call every single day, I’d be up that guy’s ying-yang so far with a firecracker he wouldn’t know what hit him, from Pfizer. I would not stop until we get these vaccines.”

“I’d be up that guy’s ying yang so far with a firecracker, he wouldn’t know what hit him.”

Another unforgettable quote from Ford.

Those of us watching did a bit of a double take before bursting out laughing at the remark, which is now very understandably being chattered about on social media.

It perhaps even tops Ford’s comparisons between himself and an 800-pound gorilla, his regular self-deprecating jokes about his own weight, and that time he told streetracing “yahoos” that “if we weren’t so backlogged on MRIs, I’d send you for an MRI to get your brain scanned.”

“go doug ford all up in your ying yang” is a great rap line waiting to happen https://t.co/JC61mb3f0I

Ford’s sentiment has been shared by many who are wondering how, exactly, Canada has ended up so far down the global lineup for the much sought-after vaccines and why our program has been a bit of a mess.

The Public Health Agency of Canada had stated last month that it expects all Canadians who want a shot will be able to get one by the end of September 2021. Trudeau, meanwhile, said that only “most” Canadians will be vaccinated by that date.

South of the border, the U.S. has so far administered approximately 14.7 million doses of the immunization, while Canada hasn’t even surpassed 600,000 — putting them at nearly 25 times as many shots given despite having less than nine times our population.

And, it is the U.S. that Ford is now asking to help complement our supply as our vaccination rollout sits idle, with the newly-opened vaccine clinic in Toronto set to close up shop just five days after opening due to our shortage.

“I can’t help but ask the president: We’re the third-largest trading partner in the world — Ontario is, just Ontario alone — and we’re the number one customer to 19 states and number two to nine more, a lot that elected you,” he continued.

“The least thing you can do is give us a million vaccines. You have 100 million down there. Give to your great neighbour that stands shoulder-to-shoulder with you to keep us going. That’s what we’d love to see from the president.”

Toronto’s historic Coffin Factory is getting a funeral