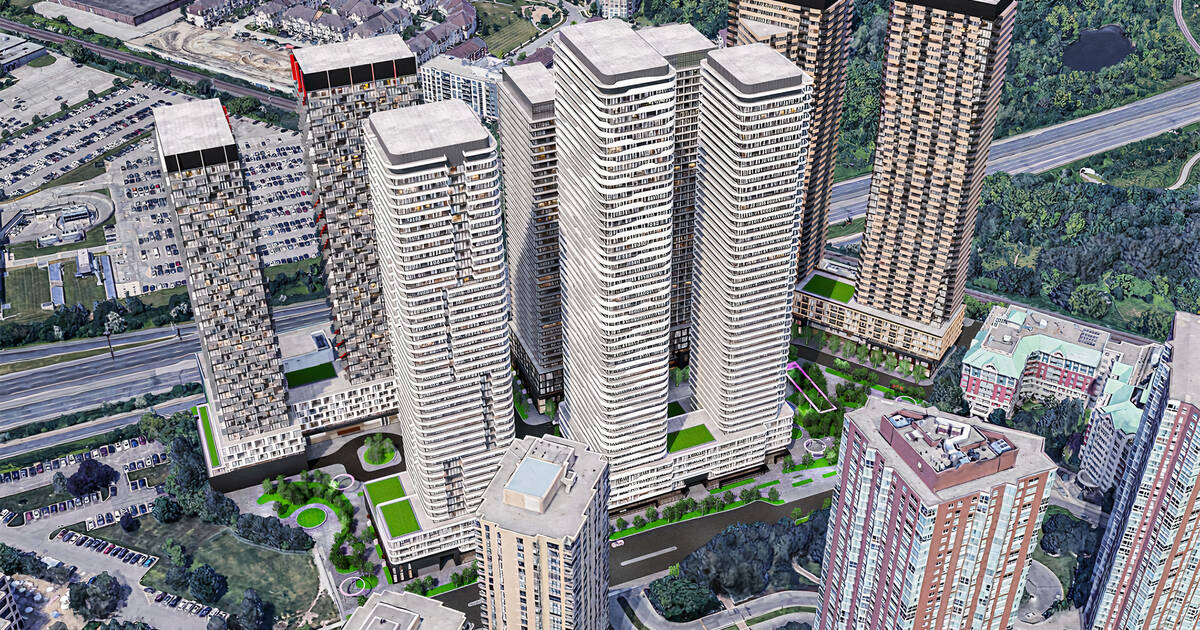 Nothing feels more like driving into or out of Toronto from the north like being flanked by hundreds of drab-looking corporate office buildings along the highway.

Whether that highway is the 427, Hwy 400, or the DVP, you’re likely to spot the logos of many familiar brands atop the rows of tall grey slabs.

Imagine how many people could live in one of those business parks if things were laid out differently. Probably a lot. At least 4,000, in the case of the aptly named “Concorde Corporate Centre” between Lawrence and Eglinton, slightly east of the Don Valley Parkway.

Located in North York’s Victoria Park Village neighbourhood, this particular group of offices has been targeted for redevelopment into a brand new mixed-use community with nine towers of 40 to 52 storeys each, set atop six-storey podiums, as well as two new public parks, among other amenities. 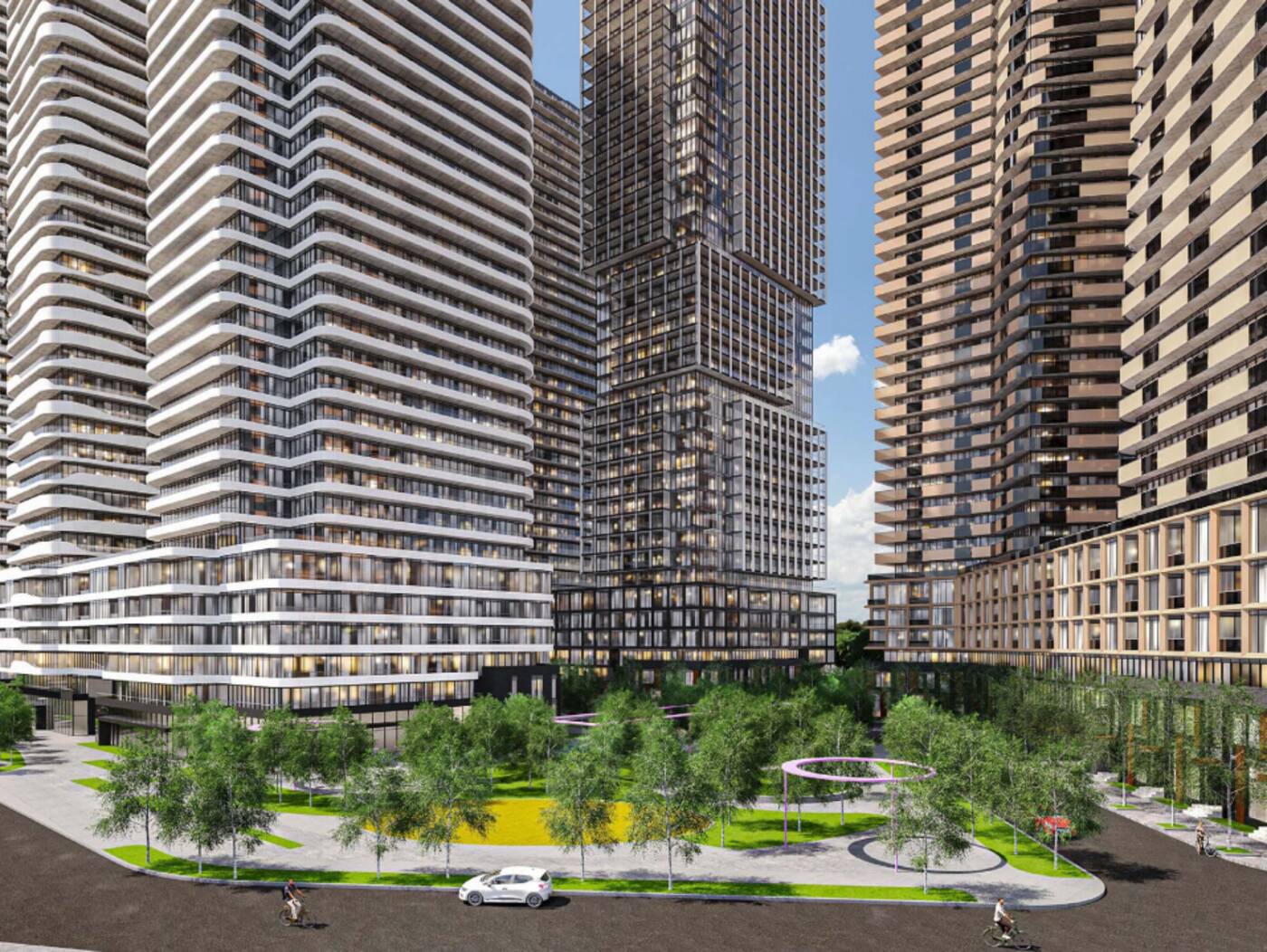 Rendering of the proposed mega-development via CORE Architects.

More important for Toronto, which has long been dealing with an affordable housing crisis driven in part by a lack of supply, the mega-development would result in the creation of approximately 4,086 new dwelling units.

A rezoning application submitted to the City of Toronto by developers Fengate CCC Holdings LP seeks permission to effectively build a new subdivision or “residential/mixed-use development” on the “underutilized” 3.1 hectare site in question.

Spanning the addresses of 1-3 Concorde Gate and 10-12 Concorde Place, Concorde Corporate Centre currently houses a handful of commercial buildings in which one can find the Canadian head offices for McDonald’s and Home Depot. One can also find an abundance of surface parking. 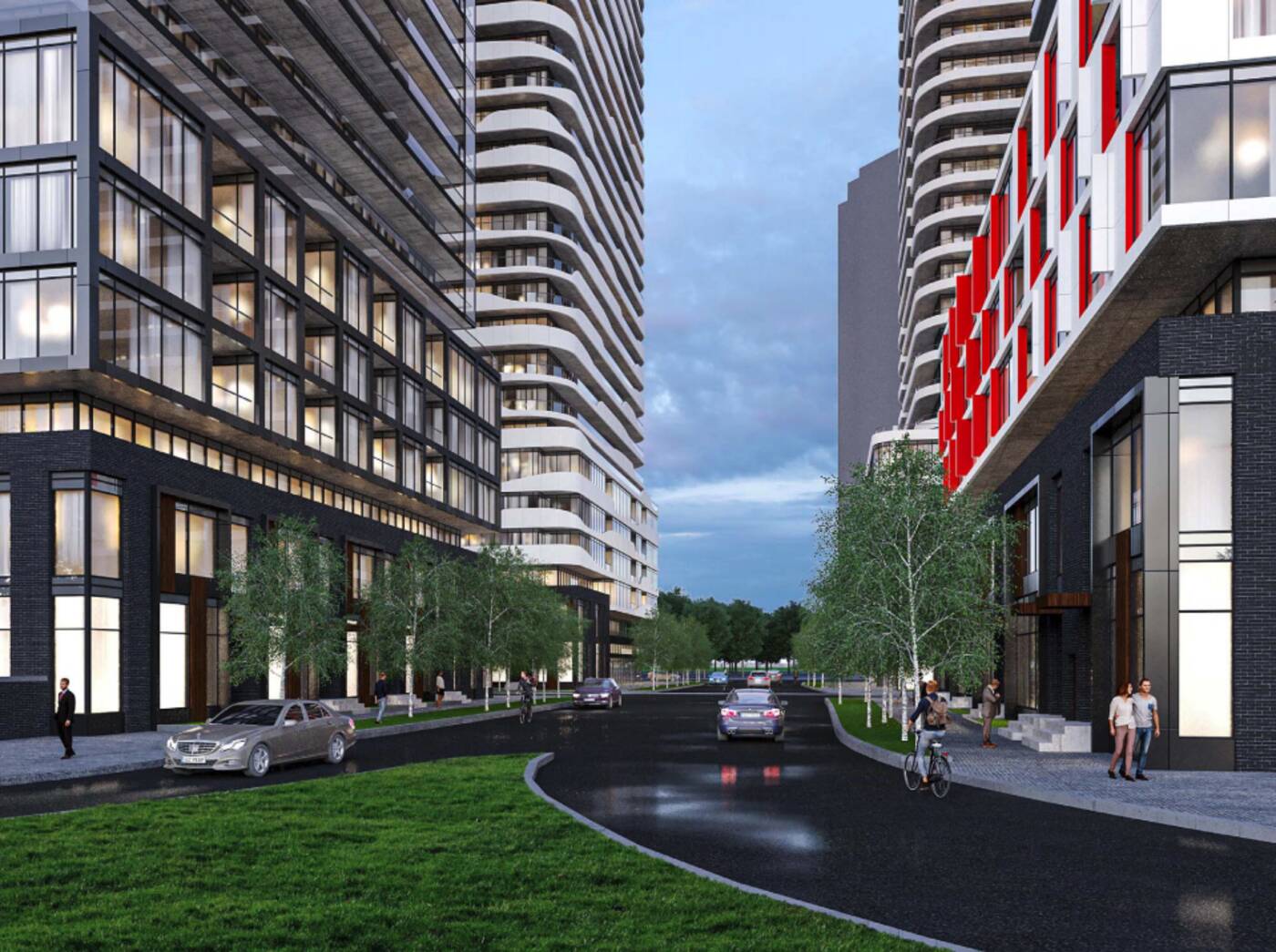 The complex would contain a new street running through it. Rendering via CORE Architects.

“Currently, the two blocks which comprise the subject site do not include any public uses, parks or public open spaces,” notes the development application.

“The northerly block in particular is dominated by large expanses of surface parking and structured parking, with buildings set well back from the adjacent streets.” 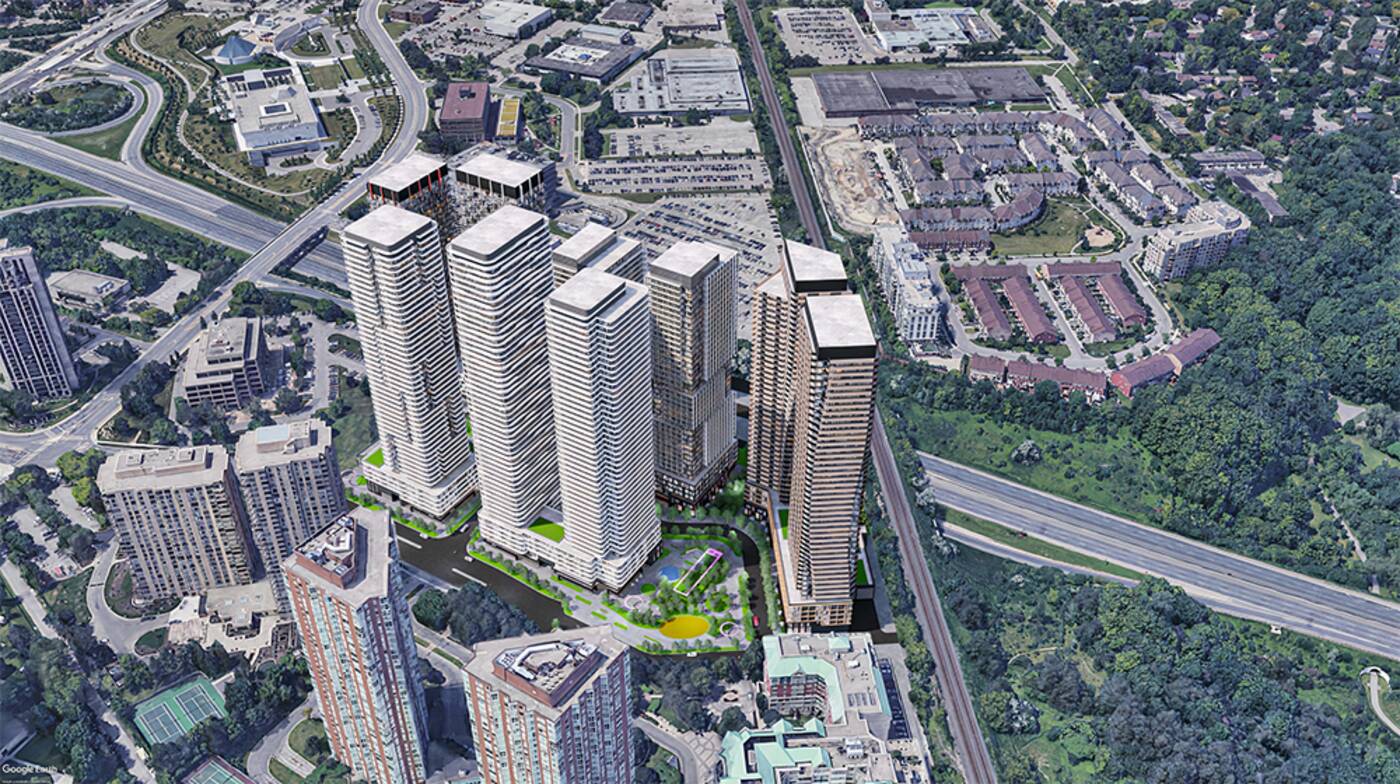 Conveniently close to the new Eglinton Crosstown LRT, the goal is to keep the development well-connected to public transit. Rendering via CORE Architects.

“The proposed buildings will animate the adjacent street frontages with active residential, retail and community uses at grade, while the upper elements of the buildings are stepped back above a generally consistent 6-storey street wall,” reads the application, which touts the inclusion of “new public amenities and high-quality community gathering spaces.”

“The proposal also includes two new public parks located at the north and south limits of the site, which total 3,690 square metres in size, in addition to a new public street which will bisect the 10-12 Concorde Place property in a general north-south direction.”

You can find all the nitty-gritty details of how the neighbourhood will be laid out in the Planning Rationale document attached to the application itself, but the most important thing to note, for the purposes of a growing city, is the aforementioned residential units. 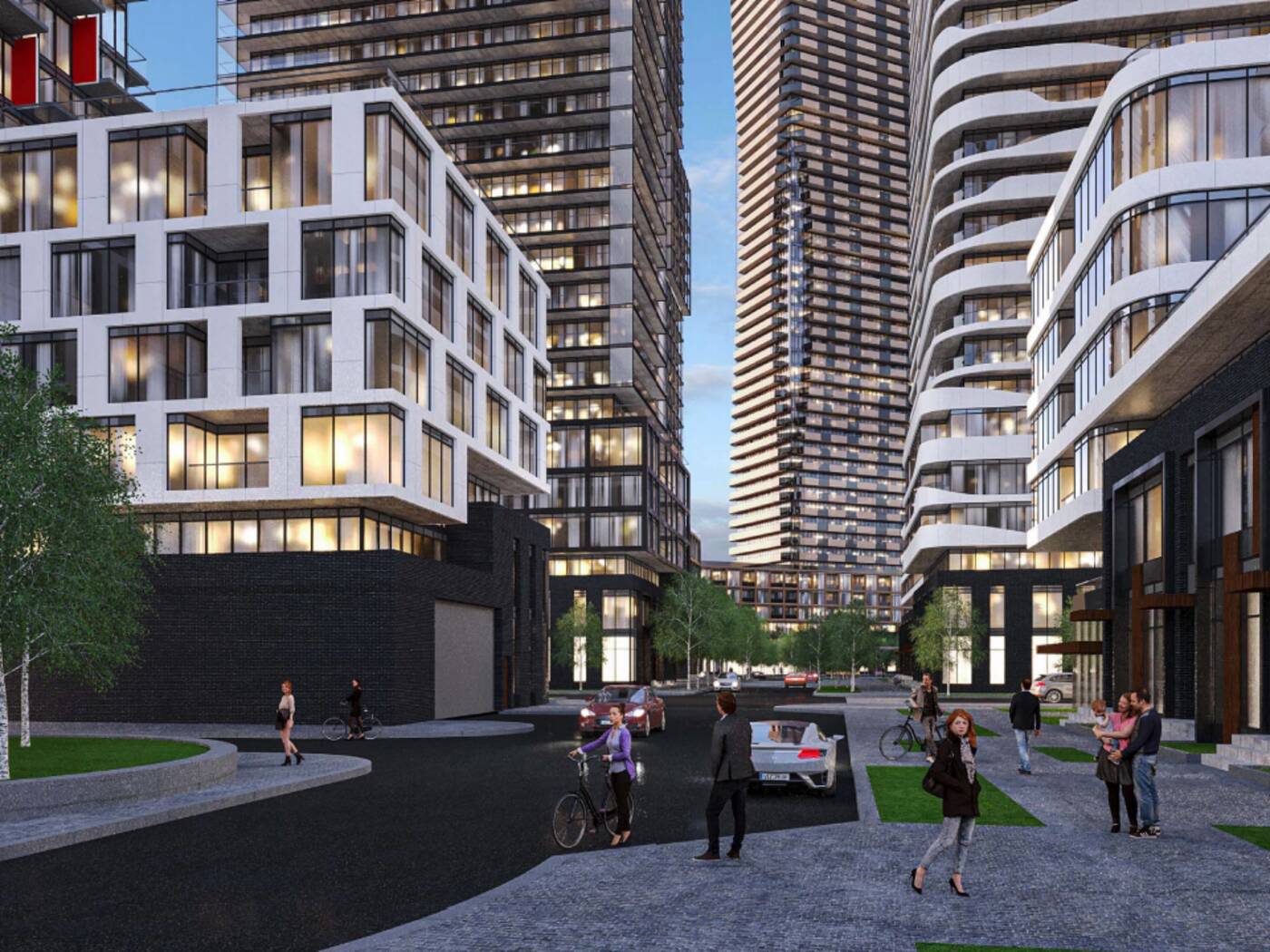 What’s now a drab office park will become a vibrant mixed-use community if approved by the City of Toronto. Rendering via CORE Architects.

The developers haven’t yet said if they’ll be condos, purpose-built rentals or a mix of both, but we do know that roughly 10 per cent of the 4,086 units will be studios.

The timing of this application is no coincidence as the highly-anticipated Eglinton-Crosstown LRT approaches completion. If anything, I’m surprised someone didn’t try to redevelop this land sooner. It’s already happening elsewhere along the line.

Application materials note that residents of and visitors to the new community would be somewhere within 530 metres to 800 metres of the entrance to the Eglinton LRT’s new Wynford stop. 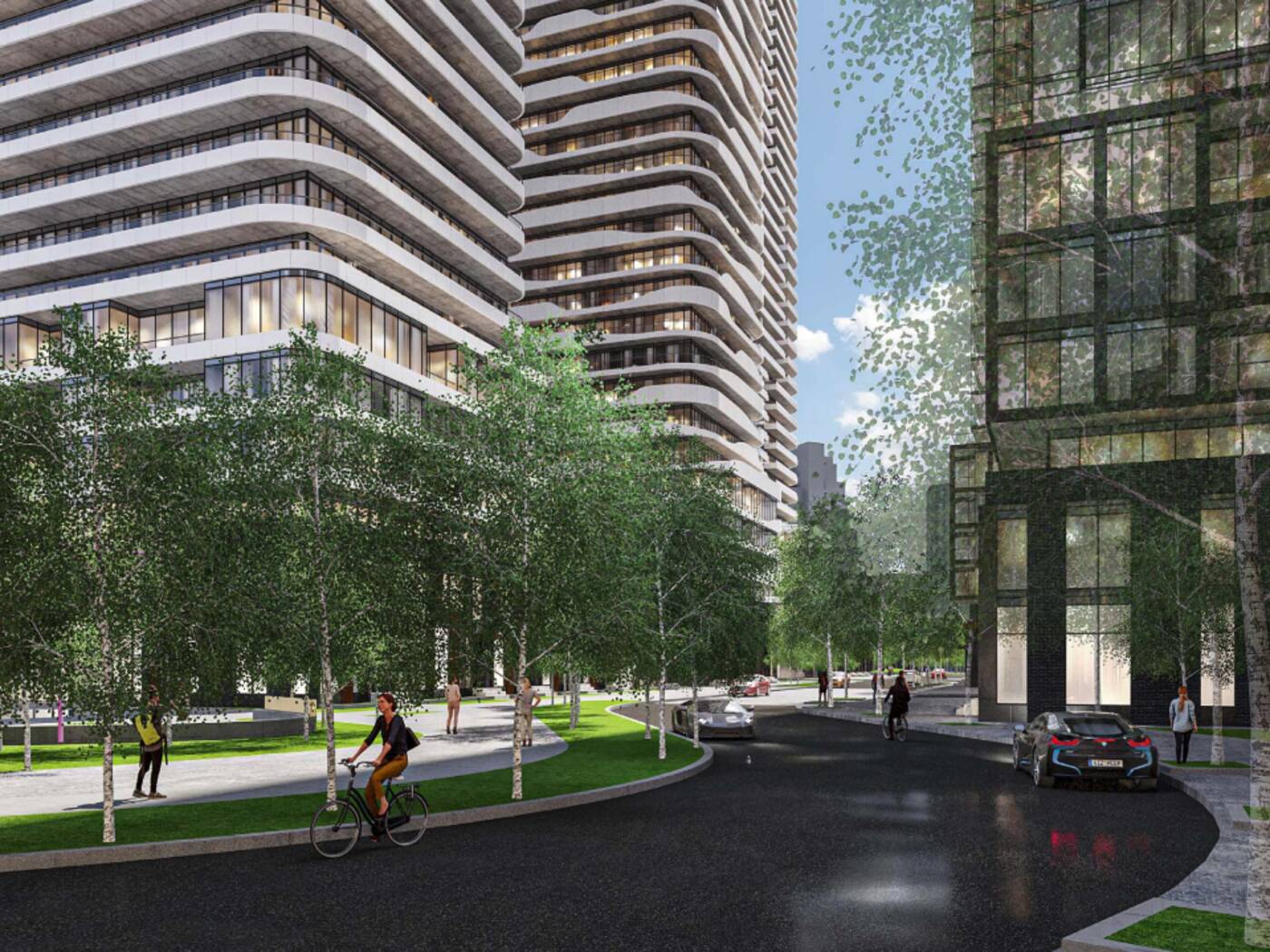 Two new public parks are among the additions this development would bring to the Victoria Village area. Rendering via CORE Architects.

“The proposal will also help to achieve the creation of a complete community in the Wynford-Concorde area given the new public amenities proposed,” write developers.

If approved and constructed as planned, the project will result in a “desirable residential/mixed-use intensification project, having convenient access to transit, recreation, cultural and community uses as well as employment opportunities, in addition to incorporating new parks and open space and community-related uses on site.”

As for when that will happen… I’d venture to say we’re at least a few years away from putting shovels in the ground. That’s just how things go: Steady, but slow.

The Best Izakaya Restaurants in Toronto

Toronto neighbourhood is tired of all the overnight construction noise